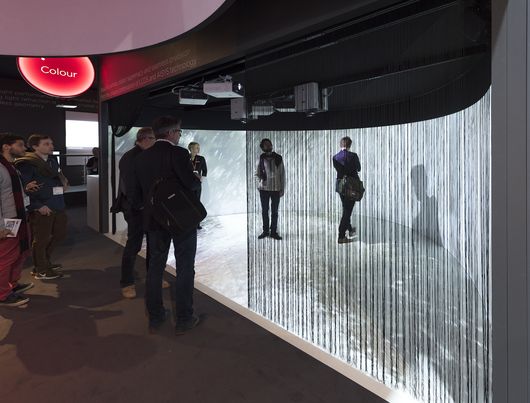 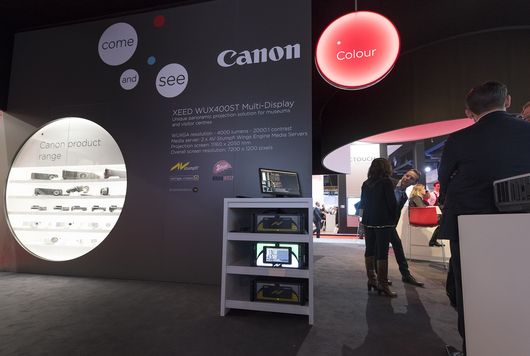 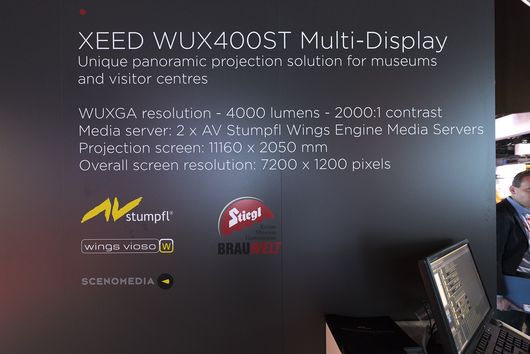 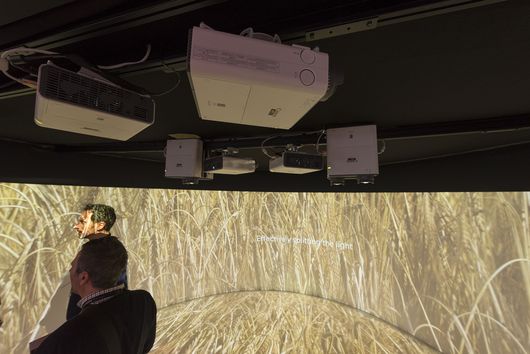 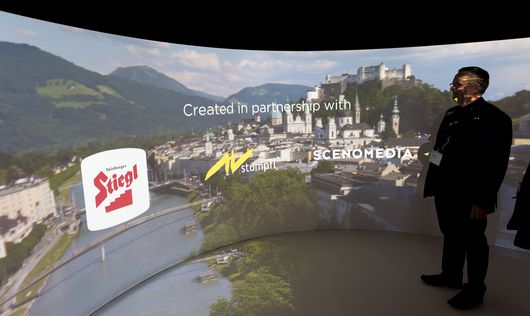 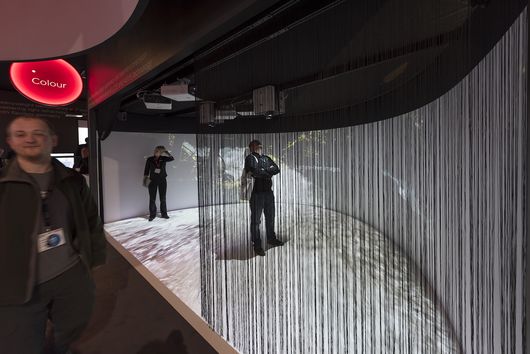 Canon Europe, world leader in imaging solutions, demonstrated an exceptional application of its XEED projector range at Integrated Systems Europe 2015, in cooperation with us.

"The Colour Zone" was one of several zones on the Canon stand at ISE designed to demonstrate the merits of Canon’s projector technology.  It was a 180 degree panoramic projection booth, designed by us using Canon’s XEED WUX400ST projectors. The custom Curve projection screen is a specially designed elliptical projection screen, designed to match the peripheral vision of the human eye.  The result was an immersive panoramic projection of around 11 x 2 metres. In order to create a more immersive experience of space, even the floor is brought to life with the projectors.  Four more Canon XEED WUX400ST short throw projectors illuminated the floor area of about 6 x 4 metres.

The installation was made possible by Canon’s unique lens technology, which allows a projection ratio of 0.57:1, creating a large projected image from a short distance, with minimal distortion and optimal colour and contrast.  The absence of distortion at the edges of the projected image makes it easy to blend several projected images together seamlessly, resulting in a total image size of roughly 7200 x 1200 pixels.

Specially filmed footage from the Stiegl brewery in Austria was processed by us and was streamed to each of the eight Canon projectors in native WUXGA resolution using dual Wings Engine Stage Quad media servers, creating a seamless visual experience for visitors to the Canon stand.

Please note that this website uses cookies. A cookie is a small text file that get put on your computer through your browser. They do not cause any damage. We are using cookies in order to make using our website and its contents more user friendly. Some cookies will be stored on your browsing device, until you delete them. They enable us to recognise your browser during your next visit. If you do not wish to use cookies, you can change your browser settings so that you will be informed about possible cookie usage. You can then decide on a case by case basis, whether to allow cookies.

Should you decide to deactivate cookie usage, our website's functionality may be limited. The cookies used for Google Fonts, embedded Vimeo and YouTube videos as well as Google Maps are essential for our website. Additional cookies you can choose to accept are being used for Google Analytics.